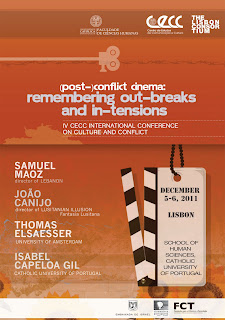 The conference will be held on December 5-6 2011 in Lisbon. The aim of the conference is to bring together researchers from different areas and disciplines to discuss how cinema addresses and examines issues of conflict and post-conflict situations.

The history of the 20th and 21st centuries merges with the history of cinema and its latest developments. On the one hand, the emergence of cinema is associated with the idea of a democratic art form. Never before had an artistic manifestation reached and affected so many people at the same time. On the other hand, besides constituting one of the privileged cultural products through which past and current conflicts are represented and thoroughly examined, cinema is a medial construction that serves as a ‘stage’ that interrogates the very act of representation, since it also reflects the problems and conflicts experienced in the context of filmic production. Cinema and conflict went hand in hand from the very beginning. Soon after the appearance of the cinematograph, a short film on the war in Cuba, a war that would lead to the island’s independence, was shown to the public in 1898. In 1915 Griffith famously portrayed a war-torn American society during the Civil War in Birth of a Nation, and raised a huge controversy on the issue of racism. Keeping in mind the revolutionary aesthetic developments and the consolidation of cinema as a multidimensional art form in the 20th century and at the beginning of the new millennium, it is important to discuss how and to what extent new cinematographies inspired by the examination of issues of memory and oblivion experienced in the last century respond to the challenges imposed by 21st-century conflicts (terrorism, economic and social crises, Islamophobia, various forms of racism, civil wars, exploitation of natural resources, among others).

Workshop - On the day after the conference, during the afternoon, there will be a workshop on film clip editing, monitored by Daniel Ribas. The workshop will be carried out in Portuguese and requires a registration. If you wish to participate, please fill out the form below. There is no registration fee.

Perfil do autor do blogue